We found that the valley roads were often busy so we stuck to the mountains as far as possible. Anyway we like hills!

We camped high up on Halloween and watched the sun setting behind the Alpi Apuane. This was around the time of an eruption from Mt Etna which may explain the dramatic colours. Otherwise it must be due to the pollution from millions of Italians driving around all day...

On the 2nd of November we got to Pisa, home of the famous tower: 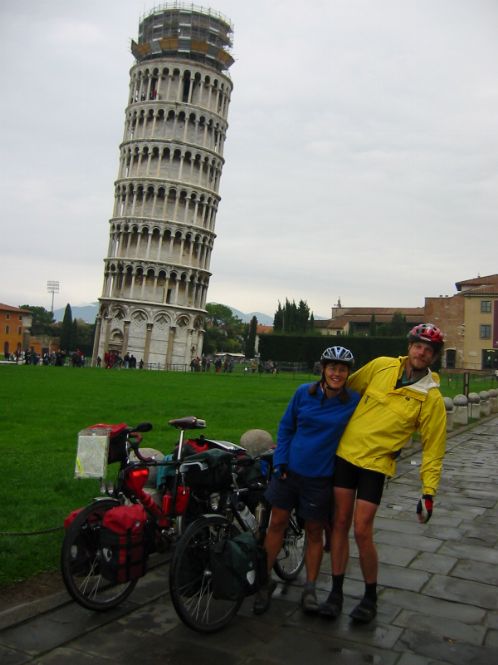 In the restaurant that evening (our first restaurant meal of the trip!) we met Dan, a Canadian who had pedalled round a large part of Europe and was heading south and thence to Greece and Turkey. We agreed to meet the next morning and pedal together for a bit.

As you can see, Dan had rather less gear with him (and also less gears if you look very closely) and tended to pedal rather faster. We enjoyed his company for a day and a half and then he sped off towards Rome. You can read more about him on www.canada.com/edmonton/edmontonjournal/info/ed/tour

For Ju the high point of Tuscany was the Terme di Petriolo. Steaming hot water gushed from a pipe, cascaded down through several pools and flowed into a clear cold river. Ju was in heaven (I had to admit that it was quite nice for ten minutes or so) And it was free!