THis was our stiffest test so far. We had been told that the col would close on the 18th or 19th of October. Apparently "close" meant that if it snowed after that date it wouldn't be cleared. This was the only accessible col that was not forbidden to cyclists and if we couldn't cross it we would have to go all the way south to the Mediterranean coast. Up until the 17th the weather was fine and we felt that there would be no problems beyond the physical effort of getting over a 2748m pass (about 8000 feet!). Then it began to rain:

We toiled upwards all day in cold rain. We stopped in a village to enquire about the condition of the col and were told that it might already be closed by snow and would not be cleared. Equally it might not be closed yet, but the rain bucketing down at that altitude was certainly falling as snow on the col so it would be closed soon unless the weather changed. We were told that the refuge (mountian hut) on the col was open so at least we would be able to stop somewhere warm and dry when we got there.

As we pedalled on we came to the snow line at about 2300m. A passing truck stopped to deliver the cheery news that there was 10cm of snow on the road and the refuge was closed. We said that we would carry the bikes and had a tent, we certainly weren't turning back now!

As it was the refuge was actually open and we met a cool guy called Yuri there who had once played the flute. He and Ju spent the evening playing flute / whistle duets with occasional concertina accompaniment from me (I had found a power supply for my laptop so I spent most of the evening writing website). When we went to bed it was still snowing and we slept little, wondering what conditions the morning would bring...

And joy of joys, a snowplough!

The road was still icy so we had to push up the hill. Only when we reached the col did a gritter arrive!

But the view looking back was fantastic!

And getting to the top was great. It was only 2km from and 200m above the refuge so it didn't take long. The gritter arrived while we were there and the driver took our photo. 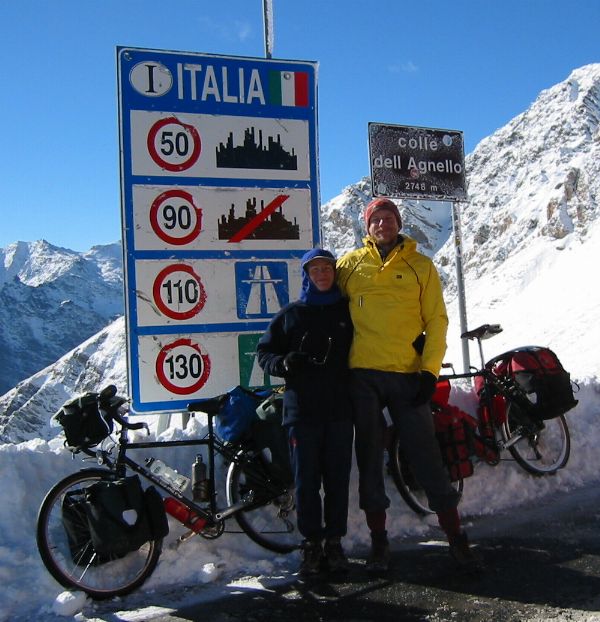 Luckily the Italians had already ploughed and gritted their side, but we still had to walk down the first bit and walk around the hair-pin bends. If anything, the views of the mountains were even better on the Italian side.

And there were loads of icicles by the streams. Must be good ice climbing in the winter.

Soon we were down away from the snow. My only regret was that the road surface wasn't very good so the fastest I dared to go was 70km/h. This was the view descending into Italy:

And this is Yuri, heading off down the French side on foot that morning: