We've spent a fair bit of time on the beach and in the sea, after all it saves having to have showers in those expensive campsites! We had our first beach stop just north of the Loire and camped on the beach. At 1:30am we were woken up by a group of French youth lighting an enormous bonfire. We went out to see them and it turned out that they were celebrating a wedding. The strange thing was that none of them seemed very drunk, they just sat around their bonfire, sang a few songs and then went home at about 3:00am !

We have re-discovered the pleasures of buying a kilo of mussels for two quid and boiling them up in the Trangia, and discovered the 'interests' of oysters. Ju asked the oyster seller how to cook them and was told in no uncertain terms not to! I had mine raw and Ju cooked some of hers, we couldn't agree which we prefered but did agree that mussels were tastier and easier.

We ate the oysters while waiting for the tide to recede so we could cross this causeway to the Ile de Noirmoutier. 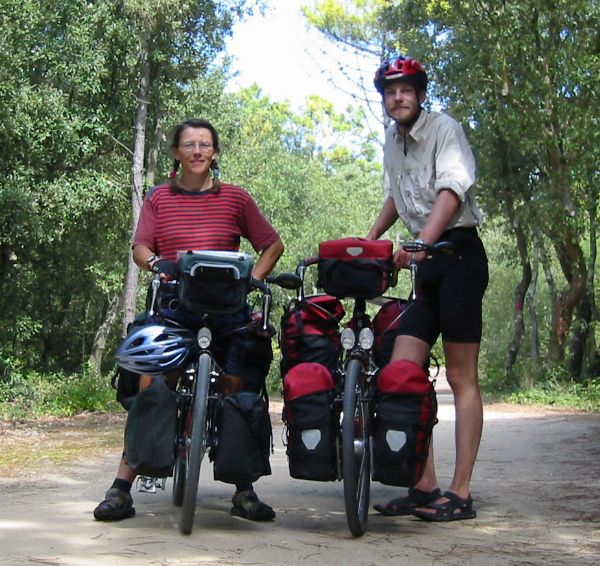 Here we are on a cycle track through pine forest. There is a cycle track most of the way down the coast from the Ile de Noirmoutier to La Tranch sur Mer. Click here for a photograph of one of the route map signs.

This is the sun setting over the beach near where we are camped now.