Across Bulgaria, Svelingrad to Ruse

Once over the border and in Bulgaria we came almost immediately to the town of Svelingrad. We thought it seemed rather small but it had two cheap hotels, an excellent restaurant, basic shops and an internet cafe so we didn't think too much of it. We spent two nights there, finding our feet in Bulgarian, decoding the restaurant menu and verifying that you really couldn't get milk. Only when we came to leave did we discover that Svelingrad is actually a fair sized town 3km down the road towards Turkey, and the place we'd been was a hamlet that had grown up around the railway station.

First impressions were drabness, rather tatty, dirty streets. The hotel owner was amazed we wanted to spend more than one night, but the restaurant served extremely tasty (and cheap - 35p!) soups and it was less than half the price of anywhere we stayed in Greece.

After our day off we started northwards. The urban roads had some impressive potholes, but once we were in the country the traffic was very light. We were passed by about ten racing cyclists, the first we'd seen since Italy. There are quite a few horse and donkey drawn vehicles on the roads which pleased Ju, and when we stopped in a village people were friendly and asked us questions in Bulgarian, German and English. The sun shone and going uphill was warm work, although patches of snow are still lying by the road and we saw frozen over ponds.

The countryside was almost empty with very little sign of habitation between the villages, which is perfect for wild camping. This is the village of Mladinovo which seems pretty typical for these parts:

Next day we cycled through a sort of Bulgarian Merseyside. Tall chimneys belched white smoke and steam, spoil heaps covered a large area and massive mining machinery was scattered across the landscape. We saw a lake on our map which we thought it might be nice to have lunch beside, but found it to be overshadowed by a power station. We had lunch there anyway, admiring the partially derelict appearance of the still functioning power plant.

That night we camped in small copse and discovered as the sun set that it was the home territory of a pack of wolves. They howled chillingly at the moon and at one point crashed through the undergrowth only a few yards from the tent. I don't as yet have any photos for the wildlife section, and I'm not sure I want to!

The following night we decided we wanted a hotel, partly to avoid the wolves and partly so we could sample a thermal bath. We stopped in a village called Banya, a few km north of Nova Zagora. We asked if there was a hotel and rather than try to direct us a man simply indicated that we should follow him and showed us the way to a surprisingly large but completely empty and very run down hotel. The owner was friendly and once we'd unloaded the bikes he directed us to the baths.

In the baths the receptionist took our 2Lv and pointed to one door for me and another door for Ju. I went into a changing room and from there to a washing room with rows of showers and troughs of hot and cold water. Most people seemed to concentrate on this room, I guess a proper wash in hot water is something few Bulgarian villagers can get at home. Beyond it was a small swimming pool full of pleasantly hot water with naked men sitting round the edge, having a soak and chatting. A couple of them tried to talk to me but my Bulgarian is pretty non-existent so all I could say was that I was a English bicycle tourist. The ceiling of the room was quite something to behold, decorated with a good number of straws (thin hollow stalactites, not the drinking variety) and looking like it could collapse at any moment.

Next day we pedalled up a small road over the Stara Planina mountains from the town of Tvardica. Tvardica was cleaner than other towns we've been to because horses were banned from the main street, while Ju did some shopping in an unusually well stocked (even had powdered milk!) supermarket I was mobbed by curious children. We have now reached lands where tourists are a novelty!

Then it was up a quiet winding road, the only traffic we saw all afternoon was a bus, five trucks, two cars and four horse drawn carts.

The road was so quiet we camped virtually beside it. In case of a repeat of the night of the wolves we barricaded the back and sides of the tent and lit a fire out the front which we cooked our dinner over. Yes, the thing in the frying pan is a sausage, you buy them by the metre!

Which of the three little piggies do you think built this house??

The top of the pass was at 1044m, high enough for there to be plenty of snow still lying beside the road. 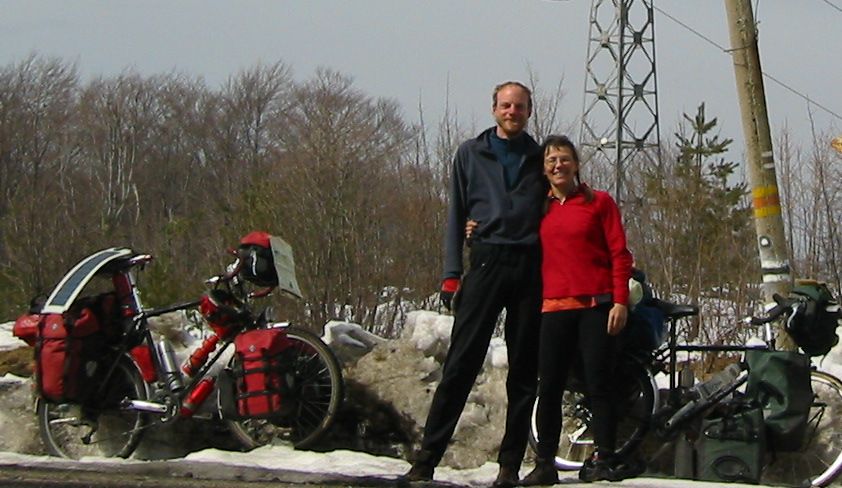 I had imagined it would be easy freewheeling from here down, after all the road had been good tarmac and snow-free. But down was on the north side of the hills where less sun fell so the road was like this:

After a few km the snow and ice petered out, leaving a rutted and broken surface that kept our speed down to 10km/h. Finally, 18km from the top of the pass we got back on to tarmac.

Next stop was Veliko Tarnovo, a surprisingly westernized town, popular with tourists. People spoke English and the cheapest hotel was 44Lv. Luckily we were found by someone with a private room to rent (mobile tel 089 679304). We spent two nights there and visited a ruined fortress that was the site of the capital of Bulgaria in the thirteenth century.

From Veliko Tarnovo we wiggled our way northwards to the border with Romania. The wiggling was to avoid the main road which carries a lot of trucks as this is one of the few Danube bridges remaining thanks to the NATO bombing of Yugoslavia. The weather changed to cloudy days with snow most nights.