We were in Cherkassy for the Labour Day holiday and celebrations. As we were having breakfast in our hotel room a brass band came down the street followed by several hundred people with red flags and banners. They included a man wheeling a trolley with a portrait of Lenin mounted on it, flanked by loudspeakers blaring some exhortations.

That evening we had a thunderstorm and the next day when we set off towards Dnepropetrovsk spring had come. The buds had opened and the fields seemed to have sprouted grass overnight. It was as if someone had thrown a bucket of green paint across the landscape. It was 25°C, the sun was shining and predictably I got sunburnt.

Along the way we met a Ukranian cycle tourist coming the other way. Sadly we couldn't communicate much but took turns to admire each other's equipment (he had six gears and centre-pull brakes). His bike and personality were very reminiscent of the British Cyclists' Touring Club old guard, thinking nothing of riding a hundred miles on an antique bike with the most basic accessories! This was the first cycle tourist we'd seen since meeting Dan in Italy in early November.

That evening we met Dimitry in a hotel in Chigirin and spent the next three days riding a circuitous route to Kremenchug with him. Dimity is more of a mountain biker than a tourist, and specialises in travelling as light as possible. He brought no tent so when it rained during our first night camping together we lent him our groundsheet protector to keep the rain off.

We soon learned that the other problem with going touring with a mountain biker is that they don't stick to the roads. To be fair this was marked as a "Road - hard surface" on our map, and it was very picturesque:

And here we are back on the road, beneath a flowering apricot tree:

A couple of days later we arrived in Dnepropetrovsk where we were met by the "Meteor" cycling club. They were very hospitable and invited us to stay with them for the weekend and showed us the sights of Dnepropetrovsk. 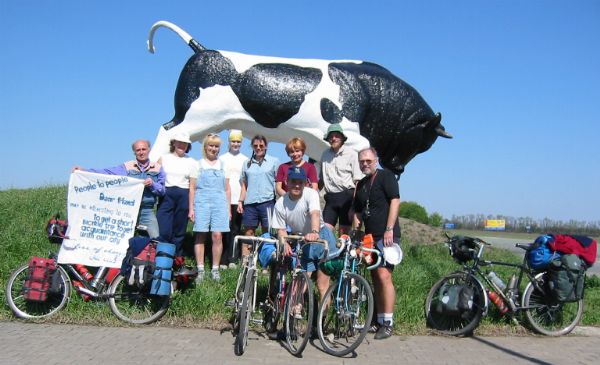 See the next page for the story of our time in Dnepropetrovsk...