I have my own section for gear as my bike modifications are always of the sort that involve common household goods and should only be tried under parental supervision.

My friends in the PE department gave me this liner as a leaving gift. It's main foundation is to be a quick drying way to keep grot off my down sleeping bag. 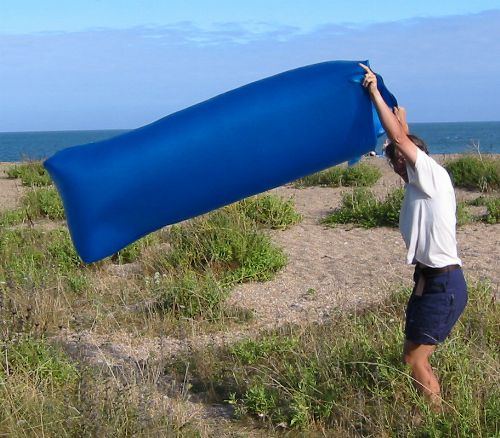 but it has other functions:

When scrambling unexpectedly becomes climbing, silk is strong and in combination with a tape knotted belt, allowed Mark to assist my ascent. The thing that looks like a blue necktie is the glorious liner ready to be deployed if I get into bother.

Thermarests are really useless for continual use camping. The first two ultra light ones delamminated in weeks. We were then told that the original ones were stronger. They were, but lasted only a matter of five months leaving Mark with a problem. If you are serious about long term touring, then get something else.

Mark was kindly rescued by my parents bringing out his old trusty karrimat. The problem was that he had become used to the comfort of a thermarest. The solution presented itself to me as Mark was planning to send off for yet another expensive and unreliable 'rest'. An old sofa had been dumped near the tent and was dry, with some very soft foam. The pictures say it all really.

I set out with SPD sandals (two sizes too big, as they don't sell them for ladies in the UK, and SPD mountain bike shoes. I HAVE REGRETTED THIS. The design of all SPD shoes means that eventually they will leak through the sole. This is because the SPD fitting plate has to be replaceable. My shoes were good for a few weeks until the rubber sealant around the fitting wore off. Marks shoes were as bad: they leaked through the cleat hole (which can be cured using silicon sealant), but now have also begun to leak around the SPD plate like mine.

Mark loves his SPD and also has no flat side to his peddles, so he has wet feet every day, as we tramp over wet grass to camp, or push the bikes through snow. If you expedition tour and you love SPD, get some seal, or neoprene waterproof socks .

I have got shot of my SPD and got some hiking shoes instead, that are a size too big. This allows room for more socks and keeps warm feet even descending at minus 2 degrees. The oversize shoes would be a pain to hike in but are no trouble on the bike. I was worried that I would miss the security of the 'clip in', but in fact I don't notice. I even feel better off road, where I can bail off the bike all the faster for not being tied in. So my advice is SET YOUR FEET FREE.

Anyone who knows me will know my whistle. The ideal whistle for cycle touring can be bought from a small shop in Doolin, Co. Clare Ireland. This comes in two jointed pieces and fits into a bar bag for instant access and concurrent instant alleviation of boredom. Since my Doolin whistle was stolen, I have been frustrated having to rummage through my back pannier for my single piece whistle. Now with some help from Mark's penknife saw, I have this FRAME MOUNTED HOLSTER:

The Tube is scavenged from a washing machine dumped at the side of the road. It is held on with cable ties, the bottom one being a snug fit. NOW THERE IS NO PEACE.

Before dog dazer I had a fear of dogs. Just the sound of their claws catching at the road as they accerate towards me was enough to get 20km an hour out of me no matter what the time of day or gradient. Now as I hear them I just think "Come and get it you big mut!" The strange thing is that just having the confidence is enough to put off many would be chasers and I only use it in defence of my life about once every 10 days.

It works a bit like a rape alarm for dogs being a whistle so high in pitch that the human can't hear it. It does not hurt the dog, but rather surprises them. The dog approaches, but will not come closer than a metre or so away. This is safe as the main danger from the dog is not the bite, but that it knocks you off the bike as happened to my dad resulting in concussion. My mum bought me my dazer from St John St. Cycles. Owners get quite worried when they see you pointing a device at their beloved slavering killer. I hope that large scale use of the dazer will encourage owners to keep their pets from roaming dangerously on roads.

The thing is that the dazer is useless unless the rider has instant access to it. You have to be 'quick on the draw'. To allow this I have mounted my dazer on the handlebars attached by velcro.

The holder is the base of a margarine tub with velcro sewn on through the plastic. The tub is held on with cable ties over the handlebar stem. The dazer has, you guessed it - stickback velcro on it and has a black cycle light trouser clip attached in place of it's original clip, so the cord sticks in firmly, but can be removed easily when it rains. The velcro is easily strong enough to hold the dazer on, but the cord means you don't lose the device if you drop it out of sheer fright during a dog attack.

This may look naff, but I reckon it's a real must for every dog nervous cyclist.

If you can't afford a dazer, I recommend a very high pitched scream. This may ruin the vocal cords, but at least alerts the thoughtless owner to the stress their pet has caused. I have also heard rape alarms work well too. In lands other than Britain, a few well aimed stones or a squirt from the water bottle can help, but this is not a solution for me as anyone who tried to play netball with me a school would know. Don't bother with the stones in Britain as Brits, being great dog lovers, will not ever have thrown stones at their hound as a deterrent, so the dog will only associate the stones with play and assume only a greater willingness on your part to participate in their game of 'chase the hapless cyclist'

See www.dazer.com to find out more about deterring dogs!

Buffs are elasticated tubes of cloth that are trendy biking gear but that would be easy to fashion yourself. I was given mine by Guy, a mountain bike journalist. I use it instead of a beard, (see photo below) but at night I pull it up to cover one thigh. This stops one sweaty thigh sticking to the other in the night(A problem that I suspect many must suffer as biking makes for big sweaty thighs). (fortunately I do not have a photo of this)