I spent literally days surfing the internet weighing up the various sub-notebooks available.  I wanted one that would fit in my handlebar bag where I hope it will have some protection from vibration, plus I wanted a big hard drive for all the digital photos and so I could take a lot of information with me.  I looked at the various PDAs but I want to be able to use the software applications I've been using at work like AutoCAD and MS Visual C++, so I can diagnose problems with the electronics and software that I've produced over the past few years.  In the end I snapped up a second hand Casio Fiva MPC-101.  This is the smallest computer every made with an SVGA screen.  Naturally I am writing this on said computer, while folded into an airline seat somewhere over Europe.  I have upgraded the hard drive to 30Gb (and installed a dual boot OS) so if one OS fails I still have the other.  With a four hour battery the while lot weighs about 1100g, I think it's brilliant! 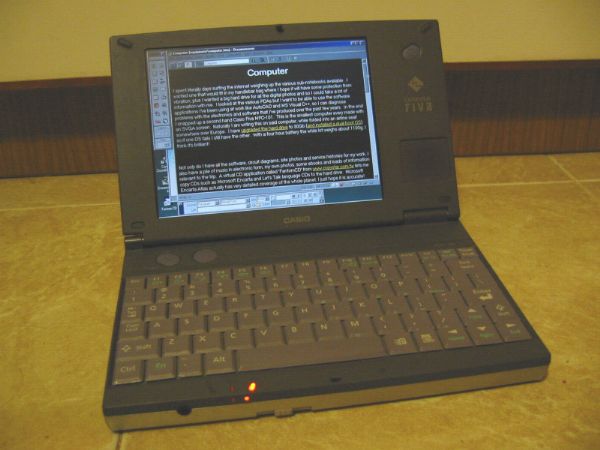 Not only do I have all the software, circuit diagrams, site photos and service histories for my work, I also have a pile of music in electronic form, my own photos, some ebooks and loads of information relevant to the trip.  A virtual CD application called 'FantomCD' from www.copystar.com.tw lets me copy CDs such as Microsoft Encarta and Let's Talk language CDs to the hard drive.  Microsoft Encarta Atlas actually has very detailed coverage of the whole planet, I just hope it is accurate! (Naturally I have licensed copies of  these CDs).

In addition to the computer I have a dinky network and modem card that has proved handy to connect up in internet cafes (means I can update the website and send and receive large emails) via the network. The modem has been handy too for the same thing in people's houses. This card is particularly good because it has the sockets built in instead of the usual fragile dangling 'dongles'. 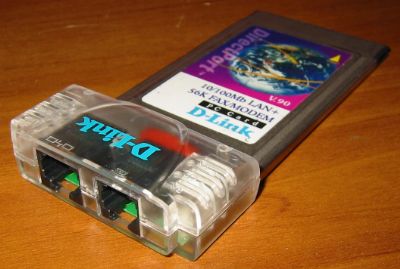 For backup and sending files (digital photos and website updates) home, I have an Iomega Clik disc drive (also called Pocket Zip). This fits entirely within the PC card slot and takes discs about the size of a 2 euro piece. Each disc holds 40Mbyte, enough for around eighty photos. The discs are quite delicate, but they come in robust plastic cases and none have failed yet. The alternative would be a heap of medium sized (say 64Mbyte) Compact Flash cards, which are a bit more expensive but the adapter for the PC card slot is cheaper and they would fit straight into the camera if the computer was to fail. 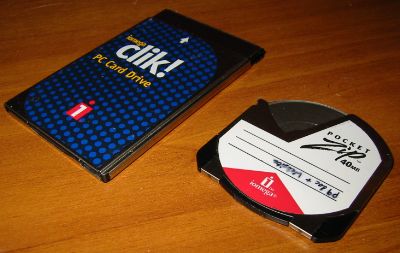 My main backup device is a 512Mbyte compact flash in a PC card adapter. This can also be used in the camera if the computer should fail.

In addition to the usual Internet Explorer, MS Office and such like there are a few special applications that I wouldn't be without:

Pegasus Mail. This is the only email client I use on the road. If I was at home I would probably use Microsoft Outlook or Outlook Express, but on the road, without backup CDs or even a CD drive I really can't afford to catch a virus. PMail is just so much more secure.

SuperJPG. This is a program for viewing, organising and indexing photos. It's great!

Fantom CD. As mentioned above this program allows you to copy entire CDs to your hard drive and then use them as if they were in a CD drive. You can have up to about twenty virtual CD drives on the computer, all loaded with CDs. Any computer without CD drive should have this.

Talk Now. This series of language CDs is quite good for getting the first few words in a language. We find we need a phrasebook as well for ready access to vocabulary and because the CD has very little depth. They are quite good as a start though and we have them for Italian, Greek, Russian, Chinese and Thai.