We arrived in Penang on the boat from Langkawi just as it was getting dark. Despite the tortuous one way system and fairly busy roads we found our way to the International School of Penang and our friends Colin and Anne who work there. The following day we gave our first official slide show to thirty children from 10 to 16 years old, who were polite enough to appear interested and in many cases actually were! Here we are with our audience and a stage prop: 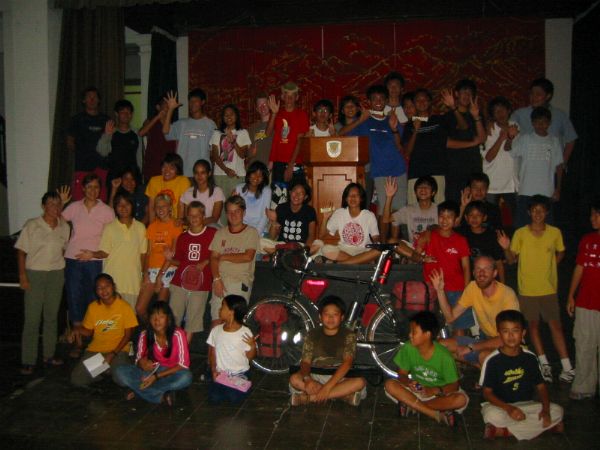 Malaysia has a wonderful choice of food because there are restaurants serving Malay, Chinese and Indian food. Here we are with Colin and Anne and their children Ellie and James in an Indian restaurant where the food is served on a banana leaf:

We spent so long in Penang because Ju wanted to get in some work experience in a physiotherapy department. Luckily Colin and Anne had some good contacts and Ju was able to spend three weeks shadowing the physiotherapists in a very well equipped department in a private hospital.

Meanwhile Mark went back to the UK to help out Porpoise (who he worked for full time before this trip) and see his parents and old friends. He even made an appearance with the Morris but managed to leave his kit behind!

Back in Penang, here's Ju in her favourite restaurant, Achi, in "Little India":

And the view from the roof of the D'Budget Hotel: